One of the things I found interesting in Gabe Zichermann's Mastering Gamification talk was his discussion of Richard Bartle's player types. His audience for this talk is a bunch of Google engineers, and to them he says:

You here in this room are not normal, you are way more achievement-oriented than the average population. If I gave you an achievement inventory, you'd score off the charts as compared to the normal population. The norm population, 80% of the population, are socializers. And they're after lightweight, non-confrontational, easy-to-reciporcate social interactions with other people.

That could explain a lot about my social life. I think doing stuff can be fun. Playing Blockus, loading U-Hauls, making tacos, or trying on the sweaters you shrunk in the wash gives me something to do.

Most social events don't seem to be organized around doing things, but they do make sense if you assume that most people there are after lightweight, non-confrontational, easy-to-reciporcate social interactions. However, that's rarely engaging for me, which you've probably noticed. Putting together the outfit for the costume party is usually more fun than the party itself.

These days, I interact with people professionally at work, as a student in physical education lessons, in neighborhood association meetings (which aren't feeding my achievement-meter as much as I'd like, but are at least based on the premise that we're there to accomplish some shared goal), and the occasional dinner party or other social gathering.

And I'm feeling a lack of intamacy with other people in my life.

Are you in the same boat, or have you been? What do you do to nurture connections to other people if not the common social rituals? Are there learned behaviours that make you more successful in these environments? Is my problem only that I rarely drink alcohol?

This morning on my way to work I was party to a moving vehicle collision. It was at N Vancouver & Broadway, where some guy decided to turn right from the center lane, without signaling, in a intersection marked "No Turns." I slammed at speed in to his passenger side.

Thank you to Carol, Ray, Eryn, and Tom, who stopped and offered support or witness, and to the kind woman (whose name I have forgotten) who let me stay in her car out of the rain until the emergency responders arrived.

And thank you, Mr. Terrible Driver, for not fleeing the scene and also waiting for the police.

My X-Ray and CT scan both came back fine, but I'll be pretty sore and stiff for a while, and have a minor concussion to recover from.

The bike doesn't seem too bad off at first glance. Both Upcycles and Bike Central seem to be on holiday though, so hasn't been to see a mechanic yet.

There's probably some paperwork I need to follow up on. I didn't leave with the driver's insurance information, but I was assured that the officer on the scene got it and I could get it from them. Anyone have advice for what to do, given that I have no auto insurance, in a situation like this? My primary concern is that the ambulance ride and hospital visit gets covered. 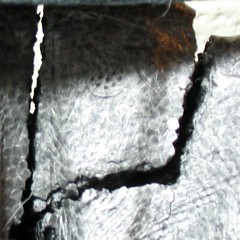 Oh, and other data points for the bike equipment safety debate:

These are some pretty rough notes on some coding stuff I need to post somewhere.

Armchair economist thought of the day:

We're Good People if we shift our spending habits to use less resources (Lower Your Carbon Footprint), right? And we're Very Good People if we do this even when it means spending a little more money to do so, by buying the more expensive item that used less fuel to get here, or buying the more expensive electricity from the eco-friendly power plant.

But doesn't that just lower the demand on the fuel and the dirty electricity? Doesn't that lower its price? The Industrial user, without my hippie compunctions, has no incentive to use the expensive power; they're rewarded for using the cheap and dirty stuff.

So please explain how the whole "green shopper" movement or whatever it is we're calling it is not just a plot by The Man to get us to pay more for stuff, encouraging us to use our money in less efficient ways, leaving more cheap resources for the Man's own personal gain.

Changing dietary restrictions has got me really curious about where to go to find new recipes. I've spent a lot of time over the past few days looking at various recipe catalogue sites. I'm focusing more on public recipe repositories, less on individual chefs. I thought I'd share some of my impressions:

Best for answering "What do I want to eat?"

cookthink asks "What are you craving?"

I'm very impressed by the design here. I find my attempts to describe it don't really do it justice. Next time you have a moment of "I'm not sure what I want," try it out!

It does not, however, have a way to filter its suggestions for dietary restrictions, and you cannot add recipes to its collection.

Best for answering "What can I make now?"

Supercook. Searching for recipes by ingredient is pretty common now, but Supercook seems to be unique in that it stores the list of things you have in your kitchen. That is, I can ask it for recipes with lentils now, and it already knows I have coconut milk and ginger from the last time I told it, and will suggest recipes accordingly. It also suggests things I should get to broaden my choices (at the moment, it suggests I buy more lemon, carrots, and spinach), and will remember that I don't want to see any recipes with tofu.

Supercook's collection of recipes comes from automatically searching other recipe sites. You cannot add recipes to it directly.

I believe that Recipe Puppy does ingredient-based search across more sites than anything else I've seen. In some ways, Recipe Puppy (and companion CookThing) are similar to SuperCook, but their interfaces are different and CookThing doesn't have Supercook's memory about my kitchen inventory and restrictions.

allrecipes.com probably deserves better than a back-handed compliment like this. Unlike the sites above, you can add your own recipes, or links to recipes. The sheer size of its collection and community counts for a lot.

But for me, choosing between allrecipes.com and its competitors was a process of elimination. RecipeZaar has pop-up ads. And I failed to make it through the sign-up process for Epicurious when it kept redisplaying the registration form like I had omitted some required element, although I couldn't find what. Coulda been a Chrome bug. Or could be some additional flag or checkbox I didn't see buried amongst the various "partner offers" on the lengthy form.

Best at Building a Recipe Box

I'm not really sure how the size of the catalogue or the vitality of the community at Springpad for foodies compares, but their recipe box has this thing where you can point it at an arbitrary URL and it will grab the list of ingredients. Nice!

From an informationology perspective, the recipe-sharing world is kind of interesting. With the exception of some highly-competitive subcultures, there's a lot of sharing that happens, relatively unhindered by intellectual property concerns. Indeed, lists of ingredients are not eligible for U.S. copyright protection, but cookbooks are, so a lot of this happens in a grey area.

At the same time, you've still got content providers with the same revenue models as elsewhere: old media publishing books or magazines, and online media wanting users to keep coming back to keep their ad impressions up. So you still get big content silos, whether they be driven primarily by user-submitted content like allrecipies or professionally sourced content owned by media giants.

None of the sites I've found so far seems to have a public API, not even Foodista (wikipedia of the cooking world) or Nibbledish (nee OpenSourceFood). It may be that some of the silos have private APIs for those who are willing to negotiate a license.

So we end up with sites with a variety of properties:

So, once again, the stronger the silos are, the more the users lose. People come up with these great products to base on a collection of recipes, like nutritional analysis, or a recommendation engine, or filtering by the contents of your fridge, but users have to choose between the site with the feature or the site with the recipe catalogue. Which means that even though I love the idea of an expert recommendation engine, I will probably never use GroupRecipe's Recipe Robot, because having other features or a larger recipe catalogue is more important.

This is probably the best case for microformats I've ever considered. Generally, I've been skeptical of microformats (if you have structured data, I want to access it through a specific API, kthx), but given the amount of distributed recipe data out there amongst these various sites and food bloggers, it might be quite valuable. And in fact, it looks like here is hRecipe, which still says "draft" but is reportedly used by Williams-Sonoma and the Food Network. Perhaps there is hope yet!

When it comes to getting out of bed in the morning, the "alarm clock" tactic is pretty well understood, and can be extended upon by increasing volume, cleverness, or number of alarms. But what tactics do you have for getting to bed? So far I've got Leechblock. Which is helpful. But I'm not asleep right now. So what else works for you?

The leadership training program I'm in is all about practicing listening and sharing. One thing that means is that I have a lot of time built in to my schedule over the next few months for talking to people on the phone. So if you're one of those people who means to keep in touch but you never quite get around to it, or otherwise think "Hey, I should talk to Kevin more often," leave a comment here. Make sure I have your phone number. And I'll give you a call sometime.

Comments screened by default so your phone numbers are not publicly revealed.

Hey, class completes at 6pm Sunday, then I have about sixteen hours in this city of San Francisco before I need to get to the OAK airport. Who of you do I get to see in that time?

Or if not who, what should I make a point of seeing on a Sunday evening?

Here are some quotable bits from No More Throw-Away People, the book by "the Time Bank guy" Edgar S. Cahn:

On what work is rewarded by the market:

If we accept the market definition of work, there are a few minor omissions worth noting. Work does not include: raising children, taking care of one's elder parents, keeping one's family functioning, being a good neighbor, or being a good citizen. So work includes everything -- except family, community and democracy. Some of us think those are rather important.

On social aspects as economic externalities:

A few weeks ago now I finished reading Henry Hazlitt's Economics in One Lesson, and there are some things from that I wanted to write down before moving on to No More Throw-Away People.

As you know, I haven't studied much economics, but Hazlitt's work is categorized as being from the classical school of thought, very Adam Smith Wealth of Nations and singing the praises of the free market. And I gotta say, there's a lot there I find very appealing. It strikes me as clean and elegant and it makes my engineer-brain happy with all this talk of optimization and efficiency.

So all this raised two sets of questions for me: